and beavers are vegetarians; 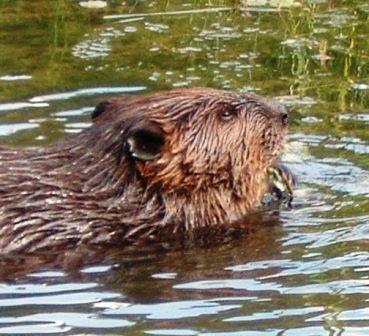 and most of the books you pick up about the two animals announce that otters are predators of beavers. So it is obvious, when they are in the same pond, a beaver doesn't want to get in the way of an otter.

No one told the beavers all that.

In the middle of March, the ice on a large beaver pond had retreated from the beavers' dam and the lodge the beavers were using right next to the dam. I went out in the early afternoon of a day warm for the season, well above freezing, to see if I could see the beavers taking advantage of the thaw. Instead, I heard an otter snorting along the edge of the ice, and to my surprise, it didn't swim away. It got itself up on a shelf of ice and 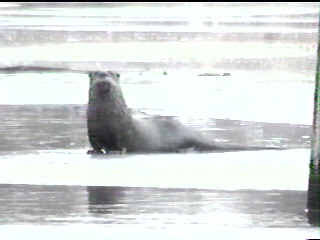 kept snorting at me off and on, but also groomed itself! 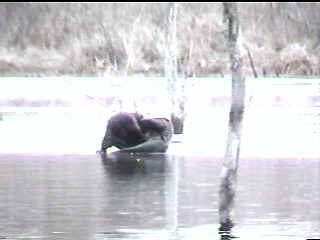 Then some beavers came out of the lodge and swam off 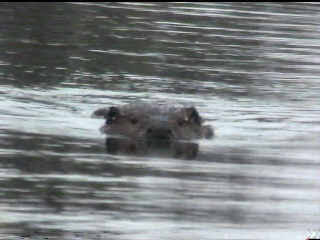 to find sticks to nibble. 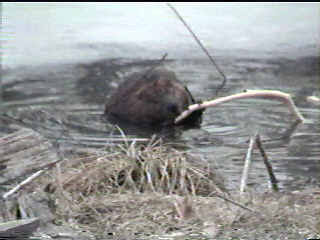 The beavers didn't look at the otter, and the otter didn't seem to look at the beavers. It kept looking at me, still snorting now and then. 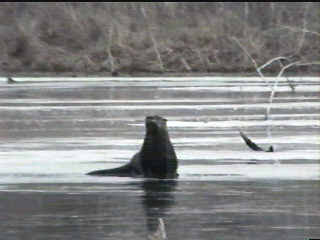 Then one beaver swam back to the lodge taking a route that appeared to me to be a bit closer to the otter. 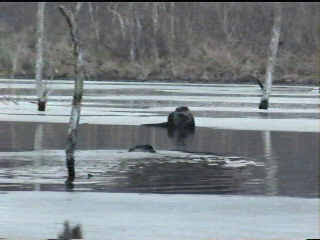 When the beaver got between the otter and the beaver lodge, it turned and swam toward the otter. 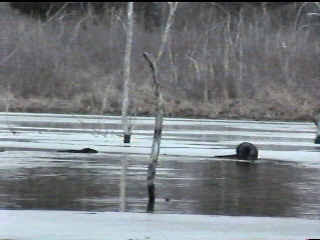 The the beaver lunged and the otter jumped into the water. 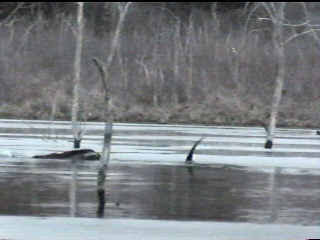 Here is a short video of the attack.

The beaver slowly went back into its lodge. The otter surface through a hole in the ice some 30 yards away, and then swam back to get a closer look at me (as if I had anything to do with it!) It was careful at first to keep behind some dead stumps. 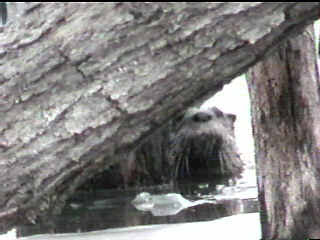 I shared this post on a Facebook page maintained by friends of beavers and some found it hard to accept any aggressive tendencies in a beaver. One wrote: "That's called a 'false charge' and is a common way that beavers scare off a predator or other potential threat. Notice that the beaver never actually touched, or even came very close to the otter. Not much of an attack."

Modern wildlife studies are a cacophony of labels most of them phony like "false charge." Using words like that to describe what an animal does assures humans that no matter what an animal does it won't challenge our preconceptions. I gave up reading books that invent false notions like false charging beavers to protect pet theories of animal behavior. I spend as much time as I can trying to watch animals in the wild. What I saw that day in March, I've never experienced again though I have dutifully gone out to the ponds during every March thaw since and in 2010 saw four otters, two beavers, and two geese eying each other. But nothing like what I saw that March.

Here is a very long video of that memorable afternoon. I have never had a longer encounter with an otter. The beavers were too hungry to notice me. 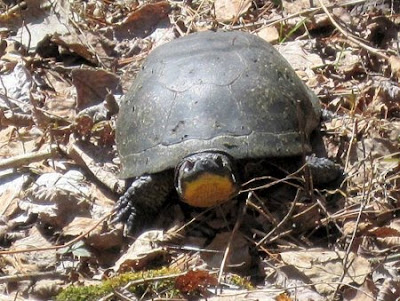 The conservation status of the Blanding's turtle varies from threatened to endangered depending on where you are. Our natural reaction to the word "endangered" is to think of rarity. So it stands to reason that Blanding's turtles are hard to find. Another natural assumption arising from calling an animal "endangered" or "threatened" is that we think the animal itself understands its precarious status and flees at the slightest whiff or sighting of a human. I have read descriptions of Blanding's turtles which say that while you might see painted turtles sunning on a log, the Blanding's is likely to slip off the log before you get a good look at it.

In the St. Lawrence River valley near Lake Ontario, Blanding's turtles are not hard to find, and, save for the snapping turtle, who you aren't going to get too close anyway, it is the boldest of the turtles, if your idea of bold is staying put and minding its own business. In my experience, painted turtles always bailout before a Blanding's turtle.

On the first warm sunny day after the ice melts from the small pools of water up on a well wooded sandstone ridge on our land, (and here's what it looked like on March 24 this year) 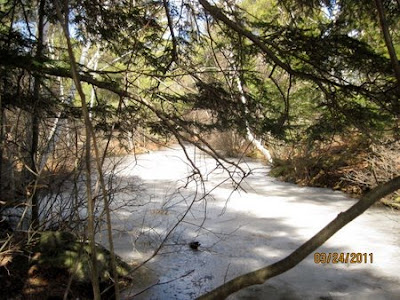 my wife takes a break from boiling maple sap and goes up to what we call the "Turtle Bog" and sees if the Blanding's turtle is out in the sun. Almost every year it is and then she goes down to the cabin, rouses me from a nap, and I go up and take a photo.

Last year we had a early thaw and a Blanding's was out on March 18, notice the skim of ice still in the water: 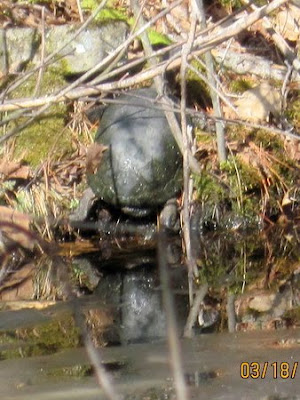 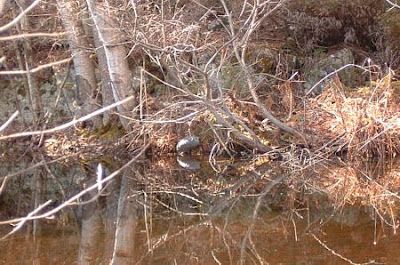 This year, on April 3, two turtles were out. One at about the same spot I saw a turtle last year in March. 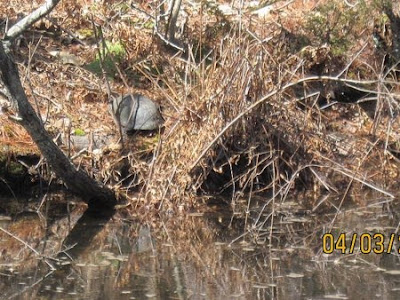 And the other was in a wet flat thicket about 20 feet from the other. 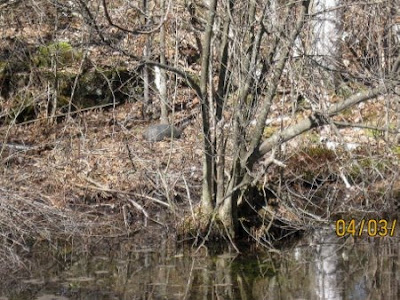 As far as I could see they were doing no more than getting some fresh air after having been in the mud all winter and listening to the wood frogs croak. One had its neck stretched out in the sun. I was attracted to that one. Love to see that yellow skin under the neck of a Blanding's

From across the little pool of water, I was no more than 20 feet from it. While I hate to force the poor thing back into the water, I know from experience that if I want a candid close-up of my old friend, then this is the time to do it. So I eased my way around to the other side of the pond, snapping photos as I went. 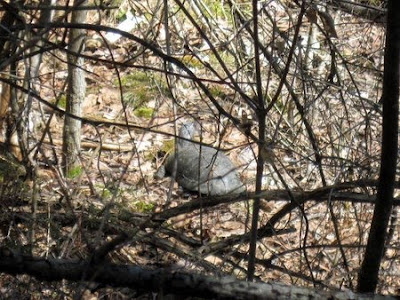 It seemed to twist its neck in my direction once, but otherwise didn't bat an eye. 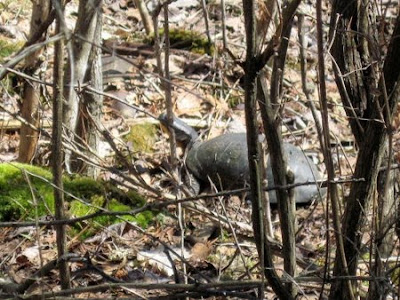 Then I got around far enough to see the yellow. 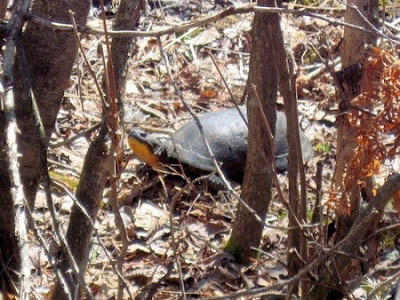 I held my breath, got in front of the turtle, and took my official portrait for the Spring of 2011 and left it in peace. 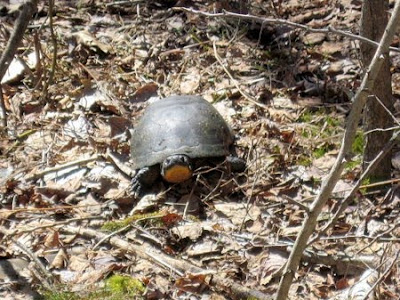 As it warms up these turtles get more active and I've seen them scouring pools for food, and, I've seen them doing it. One afternoon in late September I came up to a pond and saw a Blanding's turtle swimming in the water toward the shore. I had a camcorder and was pleased that I got it whirring before the turtle sank into the dark pond. But it didn't sink. I walked closer and kept that camcorder whirring. Soon enough I saw Mrs. Turtle upon whom the happy-go-lucky looking fellow on top was getting a ride.

Posted by Bob Arnebeck at 7:55 AM No comments:

Email ThisBlogThis!Share to TwitterShare to FacebookShare to Pinterest
Labels: turtles

It always seemed like a no brainer to me. Minks are sneaky little predators with a reputation for killing everything up to twice their size. They like to cache what they kill in their dens, and once, according to a book I read, somebody found 13 dead muskrats there. Muskrats are big rats that spend most of their nibbling grasses in and around ponds and rivers. They can swim, but so can minks. They are bigger than minks but not that much bigger.

My friend Jeff Hanna took the photo below: 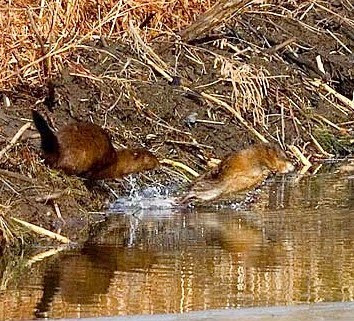 while I was handling the camcorder:

Now that's the way it is suppose to be, although as long as I was watching the mink around that pond, he didn't catch that muskrat and went off to another pond. The muskrat soon went about its business of nibbling grasses, but it wasn't foolhardy enough to chase the mink.

Then a few years later I was sitting beside a pond once and saw a mink making its rounds along the opposite shore. It poked it nose in the wrong muskrat burrow. Go, rat, Go!

I am not sure what to make of this contest between these animals except to suggest that we humans have crowned the King of the Beasts and then a descending rank of predators of which the mink is the one, who by our version of natural law, reigns over muskrats. Somebody forgot to tell the muskrats.
Posted by Bob Arnebeck at 7:38 PM No comments:

My Web Sites About Animals

Bob Arnebeck
I have several blogs and web pages on history and natural history. Between 1987 and 1994 I did extensive research on Washington DC and Philadelphia in the 1790s resulting in books in print and on-line. After I moved to Wellesley Island I began observing beavers, otters, muskrats and other animals in the woods, swamps and St. Lawrence River. Contact me at bobarnebeck@gmail.com